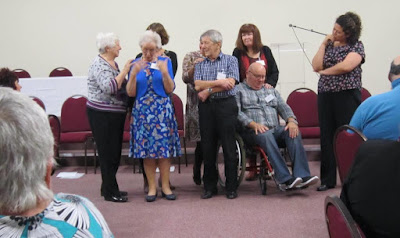 Last Thursday I attended a Dementia Supportive Communities network event in Brecon organised by Ageing Well in Wales and Brecon and Hay Dementia Supportive Community with support from Alzheimer's Society, Powys Association of Voluntary Organisations, Powys County Council and Powys teaching Health Board. The event was extremely well-attended, with representatives from the statutory, voluntary and private sectors.

The aim of the event was "to build and develop Dementia Supportive Communities across Powys by:
It was an absolutely packed day, and all I can do here is focus on some highlights, whilst giving links to further information where appropriate.

The day was introduced by Gweneira Raw-Rees (below left), the Project Lead for Ageing Well in Wales, which has the challenging remit of "ensuring Wales is a good place to grow old for everyone". Gweneira explained that one of AWW's roles is to share good practice through events. "The formula is simple. To try to inspire people to take action."

Our facilitator for the day was Trish Richardson (below right) of Brecon and Hay Dementia Supportive Community. Trish explained the concept behind dementia friendly communities (interchangeable with dementia supportive communities), emphasising that "it is about enabling people with dementia, working with them as opposed to doing for them." 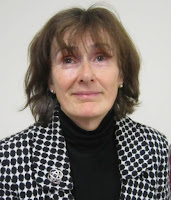 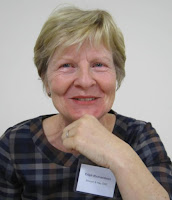 First up, and certainly the highlight of the day for me, was a performance from Re-Live Theatre Company, working alongside people with dementia. The company is passionate about the role creativity plays in removing stigma, and aims to put the real stories and experiences of people with dementia out there. The short performance was made by two members of the company alongside real people (not actors) sharing their real experiences. These included features around the importance of singing for some, and the humiliation of being bid for as a 68 year old male in "not too bad condition.... not too challenging... no immediate family... if you know what I mean...." Number NL2810 was then sold to the highest bidder for £500 - securing his place at an Elderly Infirm Unit.

And Jill Grey read her powerful poem with support from other members of the group. 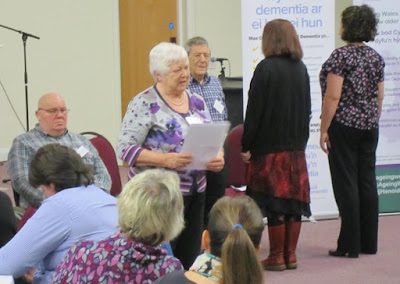 They meet in the appointed room.
Laptops, briefcases, suits.
Meet bi-monthly,
Promptly, religiously,
Unless, of course, it's cancelled
And nothing happens.

They bring their minutes
Their memos
Their own agendas,
Protect their kingdoms
Cover their backsides
And nothing happens. 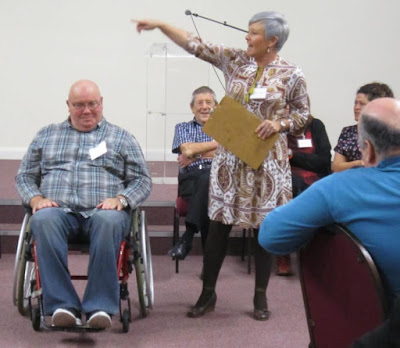 They have a bright idea.
It's brilliant, workable
Inexpensive.
Then it's - 'Maternity Leave',
Or - 'Change of Post'
And nothing happens.

'Care in the Community' means
'Keep them at home'.
Poorly trained care-workers; different each day
With eyes on the clock, pens on the paperwork
And minimum pay.
Promises of improvement
But nothing happens. 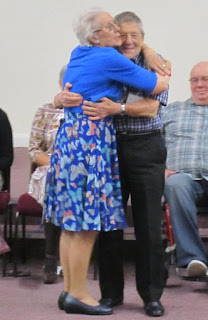 A brand new ward! An Assessment Ward!
Retitled - 'Assessment and Continuing Care'.
Queues grow deeper, waiting lists longer.
Does it really matter?
The outcomes are the same.
So nothing happens.

They close a ward; its soul has flown.
A dementia ward now filled with ghosts.
In general wards they cannot sleep.
"Those damned dementia patients!
Why can't they just shut up!"
But nothing happens.

Tories blame the Socialists.
Socialists the Tories.
Lib Dem, UKIP, Plaid add their two-penneth too.
Oh where is the one who can wield Excaliber or hold aloft good Merlin's Wand?
A bold magician who would override us all
And make it happen!

How to follow that? Well, that was the task of the next three speakers. They all made comprehensive presentations from their individual organisations' perspectives about work being done to encourage dementia supportive activities across Powys. All three acknowledged that there is still a lot to be done, but the ambition is clearly there. Again, I can only give a flavour here due to lack of space, but there is a link to the presentations at the end of the post.

Rhiannon Jones, Executive Director of Nursing, Powys teaching Health Board
Rhiannon clarified that dementia currently falls into the mental health strategy for Powys - Hearts & Minds. Her role as Chair of the steering group overseeing the Joint Dementia Action Plan is to work more with people in contact with services, and the community, to get it right.

Joy Garfitt, Head of Adult Social Care, Powys County Council
Joy spoke of the journey currently being travelled to make the council a person-centred organisation. "It is about support, not necessarily services. It is not about fitting people into a box." She explained that from April 2016 the new Social Services & Wellbeing (Wales) Act will change everything.

Gloria Jones Powell, Chair of Trustees, Powys Association of Voluntary Organisations
After introducing the audience to PAVO's general role in supporting the Third Sector, Gloria highlighted three very relevant services - Powys Befrienders and the Third Sector Brokers are hosted by PAVO, whilst the new role for Powys of a Dementia Supportive Communities Coordinator is managed by Alzheimer's Society. 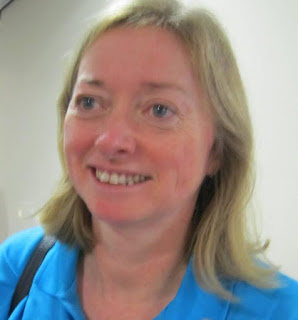 In one of the breaks I managed to catch up briefly with Karen Rodenburg (above), who has recently taken on this role. Karen is based in Newtown and covers Montgomeryshire & Radnorshire. Her colleague in South Powys is Ian Thomas, who is based in Talgarth. 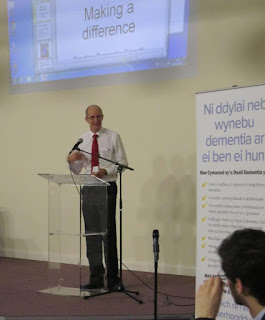 A couple of really interesting workshops later ("Experiencing dementia - how does it feel?" with Re-Live Theatre Company, and "Setting up voluntary and community-led dementia friendly initiatives" with Brecon & Hay Dementia Supportive Community) and it was time to hear PtHB's Dementia Lead - Harold Proctor - speak.

After a little bit of history relating to person-centred care, Harold described how practically we can help people with dementia who are in a hospital environment. He touched on everything from the Butterfly Scheme, to colour and tonal contrast in the physical environment, with references to liaison nurses, specialised training, digital technology and dementia pathways along the way.

Rachael Beech, PAVO's Powys Befrienders' Coordinator, was the final keynote speaker of the day. Her topic: Establishing a Powys Dementia Network. She put into words what I had been thinking increasingly throughout the day - there is a lot going on around dementia in Powys. How do we pull it all together? Care homes. Memory clinics. Singing groups. Hospitals. Memory cafes. Carers' respite. Neighbours' support.... Who is doing what, where and when? PAVO has already started work on a mapping and gapping project, and now proposes initiating a dementia alliance, forum or network - Rachael asked people to suggest names. She also posed the questions - who would be invited? How often would it meet? Would a virtual network be an option?

The new network could be facilitated by PAVO, and would be aimed at people using services and their carers in the first instance. The idea is to launch it next April after further dementia events have been held and information gathered. What do you think? Would you find a dementia network useful? Have you got a good idea for a name? Let us know in the comments section below.

All told everyone seemed to find this dementia networking event extremely valuable. A similar event is planned in North Powys for the New Year. Watch this space for further updates. Here's hoping they manage to book Re-Live Theatre Company for another inspiring session.

Jill Grey has written a book which is available online -
After the Rehearsal - Living with Dementia, a Carer's Story
Posted by Jackie N at 09:19