The real voyage of discovery consists not in seeking new landscapes,
but in having new eyes.     Marcel Proust

My life turned for me when I fully accepted what this saying meant many years ago now and I have been reminded of it again, through a recent meeting of Powys Patients’ Council, Felindre Ward, Bronllys Hospital.
I facilitate Powys Patients’ Council, a project which promotes listening to patients’ collective “voice”, in this case, whilst people are staying in the acute mental health in-patient unit at Bronllys. Some volunteers and I visit people once a month and listen to their concerns or issues. We then feed these back, anonymously, to ward management for resolution. If necessary, we also escalate issues to senior health board staff if we do not achieve resolution through ward management. Powys Patients’ Council has been running in Powys since 1989. I took over facilitating the project six months ago. Several volunteers work with me and they all have experiences of being in hospital themselves.

Last week at Patients’ Council, we had an unusual meeting in that six people joined us. Collectively, there were two main issues they all raised, but another one, has been rumbling for some time now.

When I left the ward last week, I realised I was feeling all sorts of feelings - anger, sadness, compassion, delight, amazement, warmth, empathy. I have also been feeling something else that I hadn’t acknowledged until just now, writing this, and it is a deep sense of connection. These feelings have led me to want to write about the issues raised during our ward visit and a question I have, is “Smoking and Snacking, life saving?"

I saw a statistic recently that indicated 47% of tobacco in the UK is consumed or bought by people who have been diagnosed with having a mental illness. In researching a bit more about this, there are a great number of articles on the web that could be viewed as supporting this statistic. Most of the documents describe, in some detail, what is bad about smoking. If you type in just that “why is smoking bad for you”, you’ll get approximately 92,400,000 responses. We all know the reasons smoking is not beneficial for people’s physical health, I don’t need to add one more to this.
Instead, I want to ask a different question. How many responses would come back if I asked “Does smoking save lives”? Interestingly, of the 6,580,000 responses that came back, most on the first page were related to “stop smoking and save lives”.

You see, most of the people I come into contact with, on a weekly basis, if they are connected with mental health services, smoke. I have spent most of my adulthood finding smoking very difficult because of the links between smoking and my Mother’s death just before I turned 12.

However, I find myself questioning my relationship and judgement of smoking and this has certainly increased since the recent Patients’ Council. I found myself asking why?

Why do most people I’m in contact with as part of my role, smoke? I didn’t feel comfortable about asking this question of people but I did find this article thought provoking, particularly the list of positive intentions the author relates to smoking.

I wonder if some of these “positive intentions” are why people, especially if they are involuntarily placed in acute mental health in-patient units, not only depend on smoking, but actually need to. I wonder what would happen if people weren’t allowed to smoke, what affect this may have on their state of well-being? I wonder if people are trying the best they can to exercise some of their own control over their feelings and emotions and are in fact, choosing to self-medicate, especially if they feel they are not free to exercise control over most other aspects of their stay in hospital. I wonder if, in some paradoxical way, the fact that people are given medication to suppress or regulate severe emotions, if choosing to smoke is, in fact, trying to do the very same thing as the medication people are prescribed. The only difference perhaps, is free will?

The ban of smoking in public places has had an effect on patients in hospital settings. Indeed, a full ban on health sites in Cardiff and the Vale of Glamorgan, as of 3rd September, 2013, is being implemented with the recruitment of a “smoking enforcement officer”.

I’m wondering if any thought is being given to patients’ choice in this enforcement, especially people who are obliged to stay in hospitals and/or in-patient units, for long periods of time. Will they be forced to stop smoking altogether, or given no choice? I came across this article on a patient in Scotland and some more in-depth reasoning about why smoking should not be enforced here.

The next issue raised by patients is intrinsically linked with the constancy or need to smoke whilst staying on the ward. One of the patients spoke very poignantly of how grateful he’d been last week, when two medical students had taken time to play a game of scrabble with him. Of the six people who came to speak with us last week during Patients’ Council, all of them spoke of the need for more activities on the ward to keep them occupied. The man went on to say that because of this, he was focusing more on his issues, he started to feel worse and then he found he was smoking more. Another woman told us she hadn't smoked before arriving into hospital, but she’d taken it up because she felt there was very little to occupy her.

So, this process could be seen as a cycle: 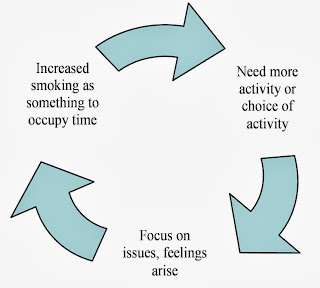 When you look at the reality of staffing issues on Felindre Ward, they are down one Occupational Therapist at the moment, due to a staff member leaving. The only other Occupational Therapist on the ward tries to run regular cooking classes which are successful and wanted but she also spends time assisting people to return home and helps manage this transition. So, if she is off the ward, there isn’t much for people to do. We will be raising this as a key area of concern or an issue in the next few months.

The final point relates to food and particularly, the removal of “Vending Machines” from Felindre Ward. Again, there has been a directive from Welsh Government that only “healthy” snacks will be sold within hospitals or health centres. This feels very akin to the smoking ban or enforcement and while there is no dispute about the health reasons for enforcing only health snacks or food to be dispensed through hospital facilities, this could be seen as taking away a patients’ right to whatever food they wish to eat, when they wish to eat it.

The vending machines were removed (and it’s not very clear why) but they only sold drinks anyway. While there is a snack trolley which comes around once a week, patients are obliged to ask staff to go off-site to a garage to purchase snacks for them, not to mention, cigarettes as most people are unable to leave the ward. We had a meeting about this issue today with ward management and we have found very good alternatives to the lack of vending machines, such as an on ward store of snacks, including chocolate and extra trolley possibilities, staff have been very helpful in trying to come up with alternative solutions.

However, it was also interesting to hear today that one man, currently in hospital, is asking for increased amounts of food, but it is due to the medication he is taking and the side effects, that of increasing appetite. Staff were indicating that they’d have to control or not allow him extras as he may not be aware of how much he’s actually consumed as his body is still telling him, he’s hungry. Staff will have to monitor more closely people’s consumption of snacks (such as muffins or biscuits), etc. I found this article of interest, particularly a point made that “75% of overeating is caused by emotions, so dealing with emotions appropriately is important”.

It appears a great deal of time is spent, both by staff and patients, trying to cope with emotions or feelings that may be coming up. What’s really come up for me, this last Patients’ Council are the ways people are trying to cope and while it’s never definitive, most people seem to be smoking to help themselves and are desperately trying to fill their time up with other things to occupy themselves. Perhaps for some people, they use food.

I’m curious if choice is taken away from people in hospital environments, the ability to choose to smoke or not, eat snacks or chocolate or drink fizzy lemonade or not, choose which activities they can do or not, are we truly expecting a compliant patient or “rather catching a tiger by its tail”.
Posted by Jackie N at 21:22