FIVE on Five Ways to Wellbeing

Have you tried the Five Ways to Wellbeing yet?
Five members of the Engage to Change sub-group, of the Powys Mental Health Planning & Development Partnership, write about their experiences.

Be Creative and Give: Louisa Kerr, Mental Health Partnership

Being creative can mean many different things to different people. We are all creative in one way or another whether it be by applying innovative or imaginative solutions to problems at work, to inventing a new recipe for the family to try.

I used to love to draw but a busy life has meant I haven’t picked up a pencil for anything other than work for many years. With the Five Ways to Wellbeing in mind, I decided to have a go at drawing a picture for my sister’s birthday, she has a lovely West Highland Terrier called Gwyn – I attempted a little sketch of him and thought well if it turns out rubbish I can always get her something else!

Finding quiet time to do the drawing was difficult at first. I felt guilty for not doing other things, like housework, but I quickly found that I could do as little as 5 minutes and enjoy it, or on the weekend, get a load of other stuff done and then have an hour to myself without worrying. Thinking about nothing else but the picture was brilliant, very relaxing and I was shocked to find that what I was creating looked like a dog! Thankfully she loved it and it meant a lot because it was personal. I’m glad I gave it a go and would recommend finding time for creative things like this to other people. 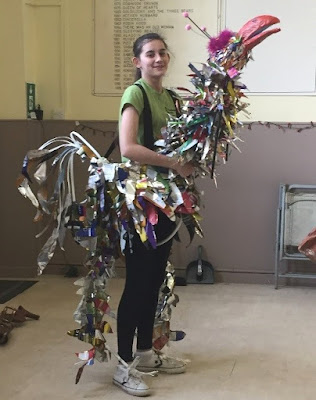 Anecdotal evidence suggests that the opportunity to engage in work or educational activities particularly helps to lift older people out of depression. The practice of setting goals, which is related to adult learning in particular, has been strongly associated with higher levels of wellbeing.

I belong to 2 am-dram groups in Brecon: Westenders and Brecon Little Theatre. Being part of these groups has offered me so many benefits. I have met a whole range of different people, younger, older and the same age as myself. My friendship group has quadrupled in the time I have been part of these groups.

Westenders is the bigger of the 2 groups with the most members, they have been putting on a yearly pantomime in the theatre in Brecon for over 75 years. Being part of Westenders has built my confidence over the years. Getting up on the stage in front of 400 people, 8 shows a week, is no easy thing, but once you have done it the feeling you get from the audience clapping and cheering is amazing.

Being in the pantomime is a real stress buster, we have rehearsals on a Monday and a Wednesday and sometimes I think I really can’t be bothered with this because I’m tired or work has been busy but I have to go because I don’t want to let people down. Once I get there all of my stress and tiredness disappears because of the atmosphere, the people, the dancing and singing.

Brecon Little Theatre makes me feel more creative. We are a little group with very little money so we have to make all of our props and scenery with very little money. We recently put on a production of Roald Dahl’s ‘The Twits’. For this we needed to design a Roly Poly Bird and other birds. We involved the children who were taking part in the production. I designed the Roly Poly Bird and suggested to use crisp packets for the feathers. Everyone was encouraged to bring in their empty crisp packets (not very healthy I know but a good way to recycle) and together we made the bird by stapling the shredded crisp packets to the frame. Everyone gets involved and there’s a real camaraderie about it. Every production, whether I am acting in it or part of the production team, makes me swell with pride because we have done it ourselves. Our last production of The Twits had such great reviews. I was assistant director and it was amazing, I was so proud of everyone involved.

I have also learnt so much from both groups, from child protection issues around changing rooms and restrictions on the hours of performance, to finance issues around hiring of venues and storage of costumes. I can honestly say joining the groups has been one of the best things I have done. 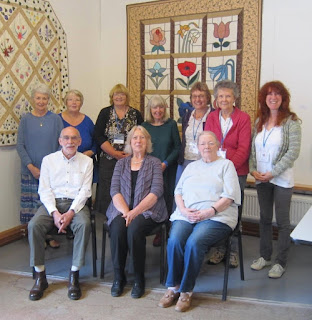 There is strong evidence that indicates that feeling close to, and valued by, other people is a fundamental human need and one that contributes to functioning well in the world.

It’s clear that social relationships are critical for promoting wellbeing and for acting as a buffer against mental ill health for people of all ages.

Here I am (standing far right) with fellow trustees at The Quilt Association recently. The charity’s home is The Minerva Arts Centre in Llanidloes not far from where I live. I have been a trustee since 2006, after starting volunteering there in 2003.

For me it’s all about connecting with people in my community and particularly those with a keen interest in the creative arts. I probably get far more out of volunteering with the charity than I put in. The biggest buzz is seeing the Centre alive with happy, busy people – whether that be at an afternoon quilt documentation workshop, the popular annual World Textile Day or a group of college students being inspired by our latest exhibition. It’s clear to see straight away in these situations that the wellbeing of these individuals is enhanced by the social interaction, creative activity and learning opportunities. But the two words “mental health” never get uttered by anyone! 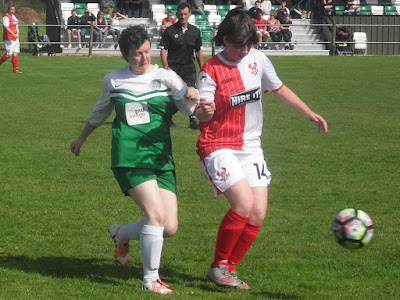 Be Active: Anne Woods is a Participation Officer in the mental health team at PAVO

Regular physical activity is associated with lower rates of depression and anxiety across all age groups.

Exercise is essential for slowing age-related cognitive decline and for promoting well-being.

But it doesn’t need to be particularly intense for you to feel good - slower-paced activities, such as walking, can have the benefit of encouraging social interactions as well providing some level of exercise.

I play football for Hay St Mary’s LFC and have done for the last two seasons – the team’s first two seasons in competitive football. We play in the Mid West Counties Female Football League and travel to matches as far afield as Worcester and Kidderminster. This photo shows me (in green and white) about to tackle a Kidderminster Harriers player, in a game we went on to lose 3-0; a good result against the team at the top of the table.

I enjoy being active. As well as helping to keep me physically fit, playing football develops mental toughness, determination, resilience and allows me to tap into my competitive spirit. It goes without saying that team work is essential and so connecting with others (another of the Five Ways) on and off the pitch, looking out for each other and good communication is also important. Plus it’s fun! Exercise releases endorphins and makes us feel better (although when we’re losing, and it’s raining, it sometimes makes me wonder…).

Reminding yourself to ‘take notice’ can strengthen and broaden awareness.

Studies have shown that being aware of what is taking place in the present directly enhances your well-being and savouring ‘the moment’ can help to reaffirm your life priorities.

Heightened awareness also enhances your self-understanding and allows you to make positive choices based on your own values and motivations.

Next bank holiday weekend, I intend to cycle to Stratford upon Avon and visit Shakespeare’s birthplace. I have never seen or read anything by the bard so I will endeavour to learn something about him.

The ride was a success:

Read more about the Five Ways to Wellbeing on this blog:

Five Ways to Wellbeing in the workplace

Festivals and the wellbeing scene
Posted by Jackie N at 09:37