Memory boxes – connecting with the past 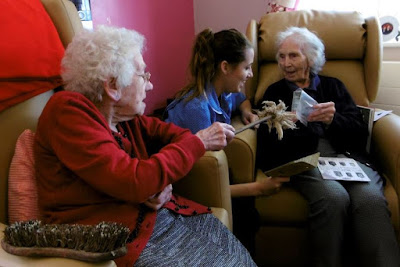 I recently found out about an innovative new dementia-friendly project in Brecon called the Memory Box Loan Scheme, which is run by Brecknock Museum & Art Gallery and funded by the Heritage Lottery Fund.

“This new service is aimed at those working with, or caring for, older people. Each box has a particular theme and is made up of a range of objects from the 1950s, 60s and 70s. The idea behind the boxes is that they can be used to stimulate memory and start conversation. They can be especially useful for talking about the past with a person with a dementia”.

The project was initially set up by our Volunteer Co-ordinator, Emily Tilling, who has since left Brecknock Museum. The project is now co-ordinated by myself and one of our curatorial assistants, Jacqueline Morgan. Emily spent a lot of time setting up the project and worked with a group of our Museum volunteers who were very interested in taking the project further. They were dedicated in their enthusiasm by either donating personal items or frequently visiting charity shops so that we could build up our collection. Local charity shops have been very generous in supporting the project when they hear what we are using the items for.


The service came about as one of the targets on our HLF Activity Plan was to run reminiscence sessions with older people. As we were about to start this we were invited to a Dementia Friendly session by Rhiannon Davies who is one of the Co-Chairs of Brecon Area Dementia Friendly Community. She delivered a fascinating and informative session and we decided that if we started up a Memory Box Loan Service then that would be of great benefit to elderly people whether they had dementia or not. 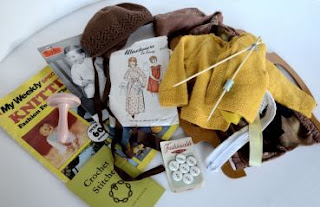 We have about 12 themed boxes altogether (Leisure, Sewing & Knitting, Men in the 50s & 60s, Transport & Holidays, Childhood, Women’s Fashion, Household, Photography, World War II, Cooking & Baking, and Shopping) and information has been circulated to care homes and day centres. The boxes don’t have an excessive amount in them and we try to put them in relevant containers such as a vanity case for ‘Women’s Fashion’ and a knitting bag for the ‘Sewing and Knitting’.

We have opted for group rather than individual use at the moment, but that doesn’t mean that that won’t change in the future. The loan service has been very popular with boxes going out most weeks. We usually let organisations have them for about a fortnight so that other groups don’t have to wait too long.

We don’t facilitate the sessions ourselves. We are just the box providers. We send out a feedback form with the boxes so we know where we could improve the contents/service and we also send out discussion prompts and some item information sheets as we appreciate that those facilitating the session may not have come across the things in the boxes before. A prompt from the Sewing & Knitting box might be: “Did you use the phrase ‘make do and mend’? Did you wear darned or patched clothes? What were scraps of material or old clothes used for (rag rugs, cleaning cloths)?” The box contents include knitting needles, thimbles, tape measures, patterns, crochet and knitting samples, cotton reels, velvet, ribbon and an old knitting pattern magazine!

Rhiannon, and the other Brecon Area Dementia Friendly Community Co-chair, Joan Brown, are also very keen to involve the young people of Brecon in raising Dementia Awareness. Joan has been working alongside local Primary Schools. Year 6 pupils regularly visit care home residents and have used some of our boxes at sessions as well as devising their own. 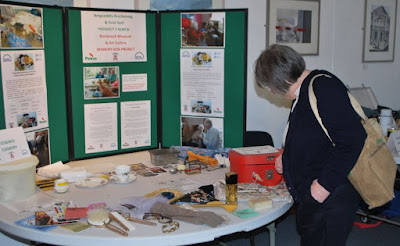 So, as you can see, it really has taken off in Brecon! We are very proud that we can be a part of maybe bringing a little bit of pleasure for someone experiencing dementia. We are of course prepared for the fact that some objects may jolt unhappy memories too.
We have promoted the service well with the assistance of Brecon Dementia Friendly Community. We recently attended the ‘Ageing Creatively’ day as part of Gwanwyn (a festival each May celebrating creativity in older age) which was held at Theatr Brycheiniog where we displayed boxes. We did the same as part of ‘Dementia Awareness Week’ at The Guild Hall, Brecon. I have also done a talk to a group of Alzheimer’s Befrienders about how simple it can be to put a box together.

Rhiannon Davies, of Brecon Dementia Friendly Community (a familiar face on this blog) has used some of these memory boxes several times at the weekly Tea & Chat and Music & Memories sessions, as well as in care home settings. I spoke to her to find out more:

The volunteer co-ordinator at the museum was full of energy and ideas. Staff there could see what was possible and made it happen. Dr Anja Pinhorn, a consultant at the Brecon Memorial War Hospital, has also borrowed memory boxes to take on to the general ward. They have a lot of long-stay patients with physical illnesses, some of whom have dementia. It is really important to keep them interested and stimulated, and this is an excellent way of doing that. I hear that they are going to make “conversation boxes” in Ystradgynlais Hospital for use on the general ward. 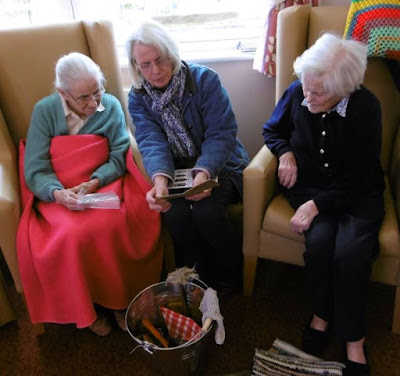 At Brecon Dementia Friendly Community we are starting a new activity in the Autumn on the hospital wards – introducing creative activities and supporting the nursing staff with ideas to generate conversations so that people do not become institutionalised. The memory boxes have been used very successfully so far as they have items in them that can trigger memories and conversations. It can, otherwise, sometimes be difficult to start a conversation with a patient.

In one of the care homes I went into with the boxes a vanity case containing fashion items was used. It had things for ladies, including a suspender belt, stockings, lipstick and a powder pack. It was just fantastic! People actually wanted to pick up and handle the items and had a lot of fun. We don’t use some of these things any more but they take people back to the time when they were used often, and can trigger all sorts of memories such as taking people back to an age when they were much younger and getting ready to go to a dance.

The boxes are a very powerful way of stimulating memories and keeping people connected. There is then a collective connection which is lovely and enhances relationships between the staff and the patient or resident. After you have built this relationship you can achieve trust and it makes things much easier for people. 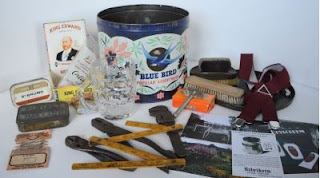 Many thanks to Martine and Rhiannon for telling us about this wonderful scheme. Perhaps you could use their ideas and develop something similar in your community?

The Brecon memory boxes are available to borrow free of charge. However, it is a collection-only service. To book a memory box or for further information call 01874 624121 or email brecknock.museum@powys.gov.uk