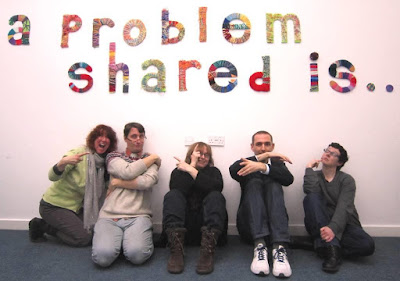 Yesterday as a team we explored how comedy could inform our work around participation - specifically around engaging with people who have been in contact with mental health services or those close to them - and learned new ways to tell stories or describe experiences.

Who better to enlist to help us than Owen Griffkin of Havin' A Laugh fame. And what better premises for our workshop than the Celf Centre run by the art charity Celf O Gwympas in Llandrindod Wells. The place is stuffed full of weird and wonderful and very inspiring artwork. You only have to look at some of it to find yourself smiling. And, they even have red noses of their very own! Perfect for those of us working on a Comic Relief funded project called Standing up for emotional health and wellbeing (that would be Anne then, far right in the photo).

In our very own bespoke Havin' A Laugh workshop Owen took us through a series of games over the course of a couple of hours. We were amazed to discover that there was much humour to be found in our own everyday lives and stories.

In the first session some of us had travelled billions of miles (think Universe, speed of light, Star Wars kind of community transport) to put the most important question imaginable to The Oracle. Two of us had the slightly challenging task of answering the questions (as a sort of bizarre two-headed Oracle), one word at a time, each after the other... talk about throwing us in at the deep end.

Questions ranged from the fairly predictable "What is the meaning of life?" to the intriguing "Why is there a colour purple?" to a rather random travel enquiry: "How do I get to Atlantis?" The answer to the latter being, quite obviously: "Atlantis relies upon your soul being attuned to many places including the underneath of your feet exactly." So.... now we know...

Next up: Truth and Lies.... Each of us had to tell three facts about ourselves to the others in the group. Simple enough, surely? But, there was a catch. (Of course). One of the facts had to be a lie, and the others had to guess which one... Blimey, we never knew this could be so hard... our colleagues turn out to be masterful liars!

Here are the three facts Jane told us about herself.... which one do you think is the lie...?

One of my truths involved attending a Star Trek convention many many light years ago, but perhaps the less said about that the better....

Further games followed, far too many to mention here, but you get a feel for the state of comedy affairs by this stage of the afternoon...

One of my favourite games was The Interview. We took it in turns to interview each other for a number of job vacancies, including Waste Recycling Operative and Koala Bear Midwife. We were either super-confident or extremely nervous, Owen explained to us. One of the funniest sessions was Anne being interviewed, as a nervous potential Rocket Scientist, by Phil. Here is how it went:

Phil: How are you?
Anne: A bit nervous.
Phil: There's no room for nerves in rocket science.
Anne: Oh. Sorry.
Phil: So, what would you bring to our next expedition?
Anne: Not much. But I'd give it a go.
Phil: What do you know about Rocket Science exactly?
Anne: Just a little. But I could go to the library and read up on it.
Phil: Right....
Anne: The main thing is... well, let's just hope we come back from the expedition.
Phil: D'you think you're confident enough for this type of role?
Anne: I am a worrier. But I do double and triple check things. I might have to restart the countdown... Once we got down to 7 I'd have to go back up to 10...

Anyone out there looking to employ a nervous Rocket Scientist then...? 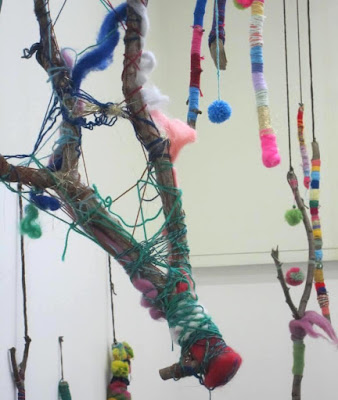 By the end of the afternoon we were absolutely exhausted we'd all laughed so hard. So we sat down and had a much-earned rest for half an hour. At the same time ('cause we're so good at multi-tasking) we ate a few biscuits, drank coffee and/or water, and chatted about how we might put these techniques to use in our participation work. We started off by acknowledging that some of us had been quite apprehensive about the session, and even a little nervous going into some of the games, but ultimately had found them extremely enjoyable and very rewarding.

We also decided that using funny and engaging ways of looking at life could be a great way of showing the realities of life for people in contact with mental health services. For example, for exploring day-to-day life on a mental health ward, or what it's like waiting to access talking therapies. At the very least some of the games could be used to break the ice at meetings and we all agreed they created a very levelling experience where we are all people together sharing some small details of our lives. 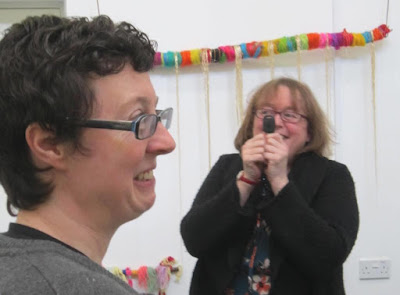 What do you think? Would you like to have a laugh? Find out more about the Havin' A Laugh workshops running at Mid Powys Mind. Or let us know your thoughts in the comments box below. 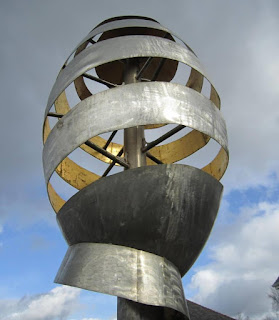 By the way, the next Stand up for emotional health and wellbeing meeting takes place this coming Monday 29 February in Llandrindod Wells. It will be at the Resource Centre, Mid Powys Mind between 3 - 5pm. If you have been in contact with mental health services, or are close to someone who has, and would like to speak with mental health professionals or give some feedback about your experiences, we would love to see you there. And if you would like to find out more about the project please contact Anne by emailing: anne.woods@pavo.org.uk or ring 01597 822191.