Psychiatry beyond the current paradigm 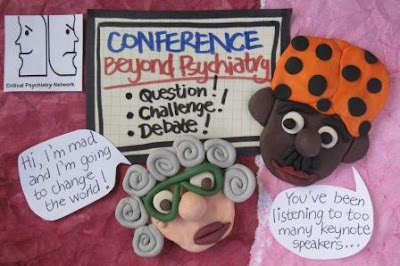 Last week Laura let me out of the office to go to this conference at Nottingham University organised by the Critical Psychiatry Network and Asylum Associates. It was perfect timing, as it meant I had the opportunity to see Jacqui Dillon speak just a week or so before she visits us here in Mid Wales for our own Shaping Services Together event on Thursday 19 September.

I stayed for two of the three days and found all the speaker and workshop sessions immensely enjoyable. All stimulated some interesting and relevant debate, and I hope to pick up on some of the specific topics in future blog posts (for example, a workshop on an innovative Finnish approach called Open Dialogue, and Clinical Psychologist Steven Coles’ session on the dynamics of power).

Today, though, I just want to give an overview of the conference as a whole to give a flavour – and maybe tempt some local readers to pluck up courage to step outside the county and take part in an event like this – because there are increasing numbers which is great. I say “pluck up courage” because – I went on my own, I didn’t know anyone else before I arrived, and I was a little nervous about how it would be... two days surrounded by strangers at a huge unfamiliar venue (well everywhere outside Mid Wales seems vast)... and people who more than likely knew far more than I did about the subject – even the title of the conference was a bit off-putting!

But five minutes after arriving at the venue I was deep in conversation with a woman from Wakefield about how difficult it is to find local groups in Yorkshire where people can share experiences about mental distress. And I was telling her about the peer support group based at Ponthafren in Newtown! (It’s a long drive though... better she sets up her own group in Yorkshire...)

The conference was promoted with this blurb:
“Voices from within psychiatry who are seeking change are beginning to be heard. The Royal College of Psychiatrists’ leading regular publication, The British Journal of Psychiatry, recently carried a paper from the UK Critical Psychiatry Network entitled Beyond the Current Paradigm, which emphasises the importance of services and practitioners working with rather than upon those who seek their help. Perhaps unexpectedly, it received very little criticism from academics and peer psychiatrists.” 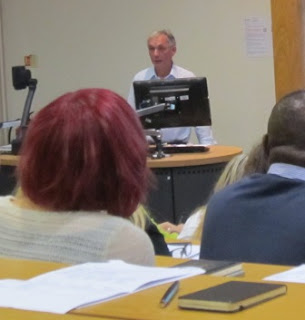 The first morning we listened to three keynote speakers, who started to explore this theme. Hugh Middleton (NHS Consultant Psychiatrist and also Associate Professor at the Nottingham University School of Sociology/Social Policy) began. He said that doctors of any sort only have authority to practice if there is clear evidence that it results in good rather than harm, and many now question whether psychiatrists fall into that category. The paper has “disappeared into a cloud of silence,” and Hugh and colleagues interpret that as “assent.”

Hugh described how psychiatric drugs are trialled, summarising that all evidence to support the use of such drugs is flawed. The evidence around the benefits of psychological therapies is also possibly flawed – it is felt that if there is a positive outcome from such sessions this is down to the success of the supportive/nurturing relationship which is set up with the "client". Hugh said that we have to accept that sometimes something happens to people which profoundly disturbs them and/or the people around them, and that contemporary medicine provides no better solution than the demonisation or incarceration options of the past. He summed up his session by saying, “people want something different to what they get from conventional experiences. What is it? Let’s look for shared solutions.”

Jacqui Dillon followed, responding to the paper from “an activist position.” It is impossible to do justice to her presentation here, but some of the key points raised included:
So, what can be done? Some of Jacqui’s ideas to whet your appetite for next week:
And what if we phased out psychiatry completely? What would the world look like then? Again, a few of Jacqui’s ideas: 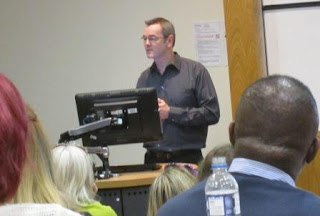 This session was rounded off by Steve Trenchard, Chief Executive of Derbyshire Healthcare NHS Trust. His background is as a mental health nurse, and he said that he wanted to listen and co-produce solutions not yet found. There is “a need to focus on strengths and aspirations.” And he wants to develop ‘listening’ and ‘being with’ skills.

Again, it’s very difficult to summarise in a short space, and Steve covered a massive range of areas in his talk, but at each point it seemed to me (and others listening as was discussed later) that his approach as a Chief Exec is extremely rare (even perhaps radical) and much needed. He considered new approaches to dementia care, schizophrenia, the use of physical restraint and seclusion rooms (including a pilot to close the latter) and our obsession with risk. He encouraged more self-control for people, which he considered the biggest factor in improving health, and spoke about the Expert by Experience programme – “no decision about me without me.”

Steve took inspiration, in part, from the past. He referred to The Retreat, set up in York in 1813 by a Quaker called William Tuke, a “supportive and healing environment” for people experiencing mental distress, as distinct from the inhumane and squalid asylums of the time.

In Derbyshire it seems like things could be changing around services as professionals like Steve are listening to and responding to people’s experiences. I really hope that in Powys people who provide or commission mental health services can make that connection so that we see a shift here as well... And on that note, I look forward to continuing this discussion next Thursday at the Shaping Services Together conference at The Pavilion in Llandrindod Wells! See you there!

An update: Jacqui has kindly sent me her presentation and you can now read it here.
Posted by Jackie N at 10:28