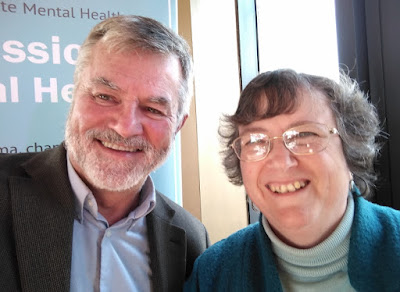 I went along to this conference with only a vague idea of the content, but being told by my colleagues at Powys Association of Voluntary Organisations that it would introduce me to some new ideas and give me plenty to think about. They were right!

I was asked on arrival if I’d come to do the yoga. I hadn’t, but it was certainly a novel start to the day!

Novelty continued with an opportunity to engage in “Compassion Circles”. Andy Bradley encouraged us to get into threes and listen to each other “with a quiet mind and an awake heart.” Andy’s concern is that our systems, with time pressures and outcomes, can make people feel as if they don’t really matter. Really listening to people can change their feeling of being valued for who they are.

The keynote speaker was Robert Whitaker, author of books about mental health treatment called “The anatomy of an epidemic” and “Mad in America.”

Robert outlined the history of dealing with mental health issues in the USA. He explained that, in the 18th century, the prevailing view and practice was to treat people experiencing mental breakdown as having lost their humanity. Sufferers were treated like animals and subjected to barbaric treatments. At the end of the 18th century, the Quakers set up homes where sufferers were seen as “children of God” and treated with compassion in pleasant surroundings. Records of the day suggest that there was a good rate of recovery following this treatment. In the 1980s, the American Psychiatric Association Diagnostic and Statistical Manual of Mental Disorders 3 became the standard handbook of psychiatric diagnosis. It heralded a shift towards the disease model of mental health. Whitaker sees this as creating a line between “normal” people and “abnormal” people, where stresses associated with life become illnesses to be treated.

I found myself pondering the role of the American Psychiatric Association and the drugs companies. Is it likely that companies that have seen a 50 fold increase in income from mental health drugs would be open to other ways of treating people without drugs? If drug companies fund the American Psychiatric Association, which apparently they do, is it possible for that organisation to embrace different treatment models?

Early disease models of mental illness seemed to be based on the theory that chemical imbalances within the brain lead to symptoms of illness that can be corrected by medication. Although the theory had been found as inadequate as early as the mid 1980s, it has still continued as an urban myth. This was a shock to me, as before this conference, I too would have said that mental illness was to do with chemical imbalances in the brain.

Robert Whitaker challenged the prevailing disease model as an effective means of treating mental distress. He said that, if the model was correct, overall recovery rates should now be going up as medication successfully treats people’s illnesses. On the contrary, statistics record that 1.1 million people were on long term disability in the USA due to mental illness in 1987. That number is currently around 5 million. There is also evidence that full recovery is more likely amongst unmedicated groups than medicated groups.

Whitaker’s overall message is that the medication model has not achieved the outcomes expected and has failed to produce scientific evidence that it is improving the mental health of the American public. He mentioned several projects that had shown success in non-medical treatment of mental distress: the Soteria project; the Norway Medication Free Inititative; the Open Dialogue's model developed in Finland.

He suggested that we need to change the script, seeing struggles as a part of being human, rather than a sign of illness which may see sufferers relying on medication for the rest of their lives. He advocated social support, listening and giving people a sense of hope. Psychological therapies also have a role to play in helping people work through traumas and distress.

During another session, I heard from Margaret Jordan about the benefits and practice of Sensorimotor Psychotherapy, which treats people holistically rather than focusing on the brain. A phrase which Margaret used seems to me to be important and worthy of more thought. She said, “Trauma is an action that needs to be completed in order for the symptoms to reduce.”

I observed an Open Dialogue session in which a course participant agreed to talk about a personal experience and we observed how Open Dialogue can help people to work through difficulties they were facing. The practitioners were Yasmin Ishaq and Rai Waddingham. This was an extremely interesting, but in many ways simple intervention, involving taking time with people and those close to them and listening to them. Yasmin is a social worker and psychotherapist and Open Dialogue lead for NHS Kent. This seems like a very positive way that people can be given time, listened to and enabled to process and work through their difficulties.

I enjoyed listening to Ruth Young from Jamie’s Farm talking about residential weeks for troubled young people, which involve real farm work and responsibilities, as well as group times for talking. This is how the website describes the programme, “Jamie’s Farm acts as a catalyst for change, enabling disadvantaged young people to thrive academically, socially and emotionally. We do this through a unique residential experience and rigorous follow-up programme, combining farming, family and therapy.”

So what was my overall impression of the day? As someone with only one year’s experience in the mental health field (in other words, a complete novice) I found it thought provoking! It challenged some views that I had held as facts, without really knowing why.

It shocked me to hear that people with severe mental illness have a reduced life expectancy, often dying between 10 and 25 years before their peers. The World Health Organisation suggests that some physical illness may be exacerbated by antipsychotic and related drugs.

Overall, it left me with a feeling that profits and big business set the agenda for many of the ways we tackle everyday life. I feel that society has a duty to question why things happen as they do and whether, in fact, science is being manipulated for the benefit of those making the most money.

I also feel that better listening and focusing on the whole person could help many people experiencing mental health issues. “Compassionate” sounds like a good word to describe how I’d like to be treated if I was going through trauma and distress.